Chen and Wyble published an interesting paper (2015) where they demonstrate that participants cannot report attributes of attended stimuli unless the participants are previously informed that this attribute is important. For instance, you wouldn’t remember the color of the apple if you had had just told someone the shape. I would have expected the opposite, so … cool!

After reading the paper (you can check it out at http://wyblelab.com/publications), I became curious whether participants might unconsciously retain some information about these forgotten attributes. Chen and Wyble posted their data to databrary.com (https://nyu.databrary.org/volume/79), so I downloaded the data and did some quick analyses that you see here! I want to commend Chen and Wyble for sharing their data. This is something everyone should start doing (including me).

Below, I will start by showing I can replicate Chen and Wyble’s analyses, then I will investigate whether there’s a trace of unconscious memory for the “forgotten” features.

EDIT -12/22/15- Brad Wyble recently pointed out that I overstated the claim in their paper. They do not claim participants have complete amnesia for unqueried object attributes. Rather, Chen and Wyble focus on the dramatic performance change between the first and second trial following the initial query about an object attribute. This performance change demonstrates amnesia, but not necessarily complete amnesia.

I’ll start by loading the python libraries that I’ll use throughout analyses.

Here are some quick functions I wrote for running different statistical tests and plotting the data. I won’t explain this code, but encourage you to look through it later if you’re wondering how I did any of the analyses.

The data is loaded, lets just take a quick look at the data after loading it in.

I want to create a new variable.

Before explaining the new variable, I should explain a little about Chen and Wyble’s experiment. Half the participants were instructed to find the letter among numbers and the other half were instructed to find the number among letters. 4 items were briefly flashed on the screen (150 ms) then participants reported where the target item had been. Each of the 4 items was a different color.

Lets just take a quick look at overall accuracy. Make sure everyone is doing ok on the task. Below I plot the mean accuracy of each participant…looks like participant 23 struggled a little. Chen and Wyble (2015) notes that no participants were excluded or replaced.

I might have replaced participant 23 since his/her accuracy is easily 2.5 standard deviations below the mean accuracy (I print this value below)…seems like participant 23 was doing something different in this task. 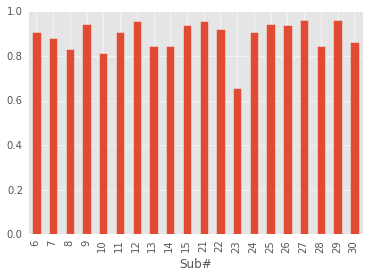 Lets look at participants’ performance when asked to identify the target’s location. I will plot performance as mean accuracy in the presurprise,surprise, and postsurprose trials. 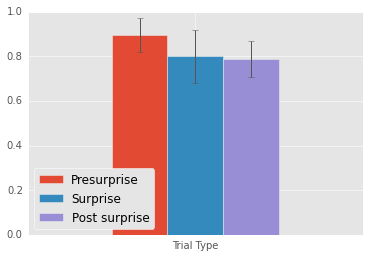 Replicating Chen and Wyble, participants perform no worse in the surprise and post surprise trials, indicating that they succesfully found the target.

Now lets look at participants’ ability to report the target’s color in the surprise trial and the trial immediately following the surprise test. 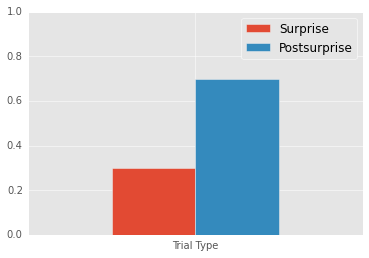 We perfectly replicate Chen and Wyble; participants respond more accurarely in the post-surprise trial than in the surprise trial. 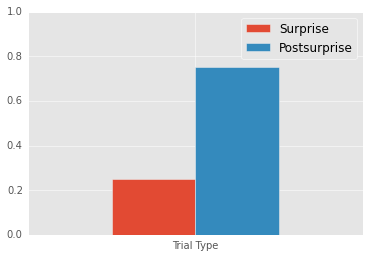 So far, I’ve perfectly replicated Chen & Wyble (which is good since this is their data).

First I want to make some variables representing whether the target’s color and identity repeat across trials.

Lets see what happens when the target’s color and identity repeat.

Looks like a 2.5% increase in accuracy. Now, this wasn’t really a planned comparison, so please take this result with a grain of salt.

As a sanity check, lets look at how repetitions in the target’s location (the reported feature) effect performance. 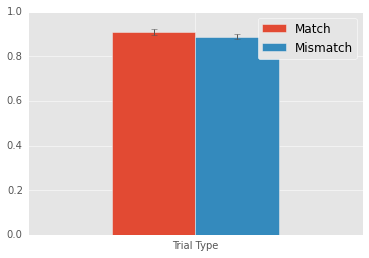 Target location repetitions lead to a 2% increase in performance. Again, this result is robust.

It’s a good sign that this effect is about the same size as repetitions in the unreported features.

The best way to demonstrate that this effect is real would be to show that it also exists in another similar Experiment. Chen and Wyble provide a replication of Experiment 1. In this experiment, the only difference is the target and distractors appear for longer and are not masked (making them easier to see). 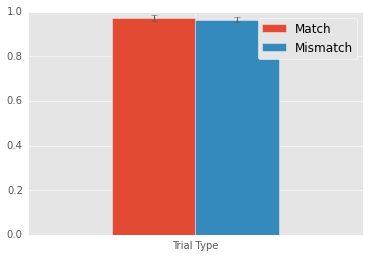 Wow. Only a 1% change in accuracy, so again not big. Nonetheless, this result is signficant. So, Some evidence that participants perform a little better when the targets’ color and identity repeat.

This suggests that participants retain some information about the targets’ color and identity even though they cannot explicitly report these attributes.

Now, I would probably want to replicate this result again before trusting it, but I’m relatively confident that participants unconsciously retain some information about the target’s color and identity.