As usual, I will post this code as a jupyter notebook on my github. 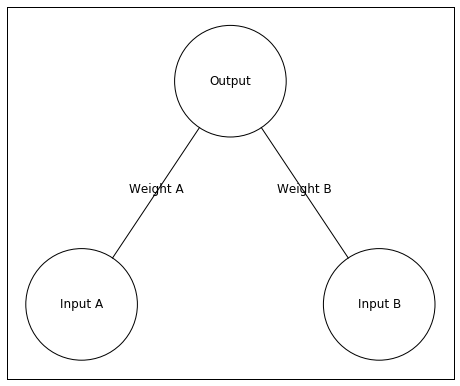 In order to know the Output unit’s activity, we need to know its input. I will refer to the output unit’s input as . Here is how we can calculate

a more general way of writing this is

Thus, the input to the output neuron is 0.5. A quick way of programming this is through the function numpy.dot which finds the dot product of two vectors (or matrices). This might sound a little scary, but in this case its just multiplying the items by each other and then summing everything up - like we did above.

Lets take a look at a logistic function. 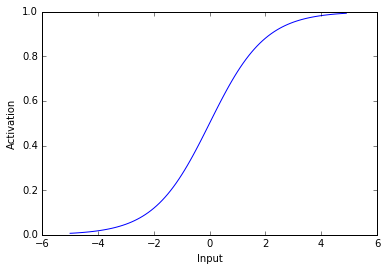 As you can see above, the logistic used here transforms negative values into values near 0 and positive values into values near 1. Thus, when a unit receives a negative input it has activity near zero and when a unit receives a postitive input it has activity near 1. The most important aspect of this activation function is that its non-linear - it’s not a straight line.

Now lets see the activity of our output neuron. Remember, the net input is 0.5 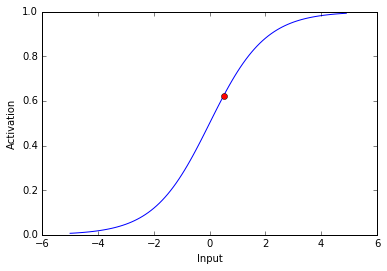 The activity of our output neuron is depicted as the red dot. 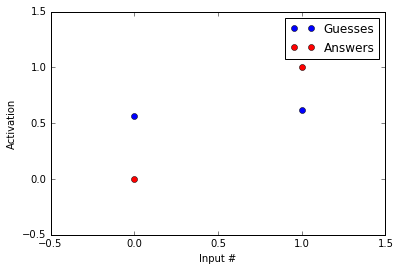 The guesses are in blue and the answers are in red. As you can tell, the guesses and the answers look almost nothing alike. Our network likes to guess around 0.6 while the correct answer is 0 in the first example and 1 in the second.

Lets look at how backpropogation reduces the distance between our guesses and the correct answers.

First, we want to know how the amount of error changes with an adjustment to a given weight. We can write this as

This change in error with changes in the weights has a number of different sub components.

Through the chain rule we know

Let’s break this down using our example. During this portion, I am going to gloss over some details about how exactly to derive the partial derivatives. Wikipedia has a more complete derivation.

Here is how we can write our change in weights

This is known as the delta rule.

Thus, is shrinking which will move the output towards 0. Below I write the code to implement our backpropogation.

Above I use the outer product of our delta function and the input in order to spread the weight changes to all lines connecting to the output unit.

Okay, hopefully you made it through that. I promise thats as bad as it gets. Now that we’ve gotten through the nasty stuff, lets use backpropogation to find an answer to our problem.

It seems our code has found an answer, so lets see how the amount of error changed as the code progressed. 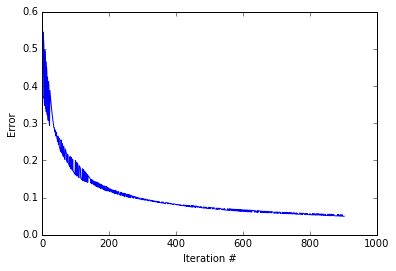 It looks like the while loop excecuted about 1000 iterations before converging. As you can see the error decreases. Quickly at first then slowly as the weights zone in on the correct answer. lets see how our guesses compare to the correct answers.

Not bad! Our guesses are much closer to the correct answers than before we started running the backpropogation procedure! Now, you might say, “HEY! But you haven’t reached the correct answers.” That’s true, but note that acheiving the values of 0 and 1 with a logistic function are only possible at - and , respectively. Because of this, we treat 0.05 as 0 and 0.95 as 1.

Okay, all this is great, but that was a really simple problem, and I said that neural networks could solve interesting problems!

Well… this post is already longer than I anticipated. I will follow-up this post with another post explaining how we can expand neural networks to solve more interesting problems.