In a previous post, I described how to do backpropogation with a 1-layer neural network. I’ve written this post assuming some familiarity with the previous post.

To describe backpropogation with a hidden layer, I will demonstrate how neural networks can solve the XOR problem.

Below, I have depicted the XOR problem. The goal is to find a model that can distinguish between the blue and red groups based on an item’s values.

This code is also available as a jupyter notebook on my github. 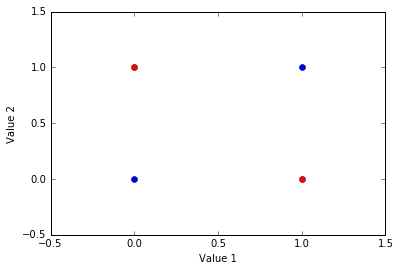 While this problem may seem relatively simple, it gave the initial neural networks quite a hard time. In fact, this is the problem that depleted much of the original enthusiasm for neural networks.

Neural networks can easily solve this problem, but they require an extra layer. Below I depict a network with an extra layer (a 2-layer network). To depict the network, I use a repository available on my github. 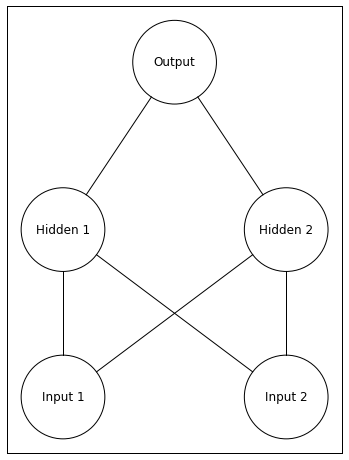 Thus, when the neural network makes its guess, the only difference is we have to compute an extra layer’s activity.

One additional aspect of neural networks that I haven’t discussed is each non-input unit can have a bias. You can think about bias as a propensity for the unit to become active or not to become active. For instance, a unit with a postitive bias is more likely to be active than a unit with no bias.

I will implement bias as an extra line feeding into each unit. The weight of this line is the bias, and the bias line is always active, meaning this bias is always present.

Below, I seed this 3-layer neural network with a random set of weights. 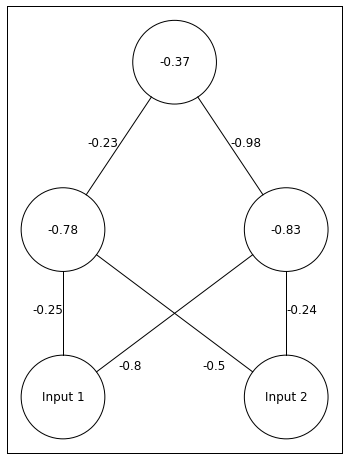 Lets go through one example of our network receiving an input and making a guess. Lets say the input is [0 1]. This means and . The correct answer in this case is 1.

First, we have to calculate ’s input. Remember we can write input as

with the a bias we can rewrite it as

Remember the first term in the equation above is the bias term. Lets see what this looks like in code.

Note that by using np.dot, I can calculate both hidden unit’s input in a single line of code.

Next, we have to find the activity of units in the hidden layer.

I will translate input into activity with a logistic function, as I did in the previous post.

So far so good, the logistic function has transformed the negative inputs into values near 0.

Now we have to compute the output unit’s acitivity.

plugging in the numbers

Now the code for computing and the Output unit’s activity.

Okay, thats the network’s guess for one input…. no where near the correct answer (1). Let’s look at what the network predicts for the other input patterns. Below I create a feedfoward, 1-layer neural network and plot the neural nets’ guesses to the four input patterns. 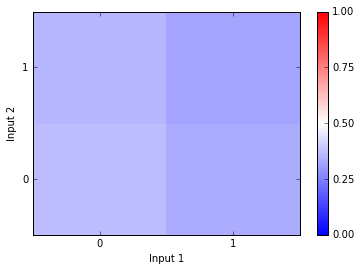 So how do we update the weights in order to reduce the error between our guess and the correct answer?

Now multiply this weight adjustment by the learning rate.

Finally, we apply the weight adjustment to .

Now lets do the same thing, but for both the weights and in the code.

We will describe backpropogation for the line connecting and as

Pretty similar. We just replaced Output with . The interpretation (starting with the final term and moving left) is that changing the changes ’s input. Changing ’s input changes ’s activity. Changing ’s activity changes the error. This last assertion (the first term) is where things get complicated. Lets take a closer look at this first term

Again, I am glossing over how to derive these partial derivatives. For a more complete explantion, I recommend Chapter 8 of Rumelhart and McClelland’s PDP book. Nonetheless, this means we can take the output of our function delta_output multiplied by and we have the first term of our backpropogation equation! We want to be the weight used in the forward pass. Not the updated weight.

- this is specific to logistic activation functions.

Lets try and write this out.

It’s not short, but its doable. Let’s plug in the numbers.

Not too bad. Now lets see the code.

Alright! Lets implement all of this into a single model and train the model on the XOR problem. Below I create a neural network that includes both a forward pass and an optional backpropogation pass.

Okay, thats the network. Below, I train the network until its answers are very close to the correct answer. 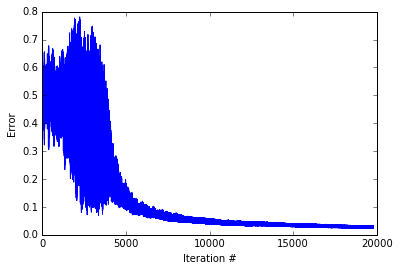 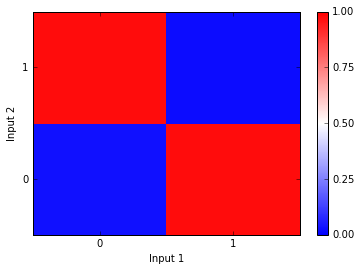 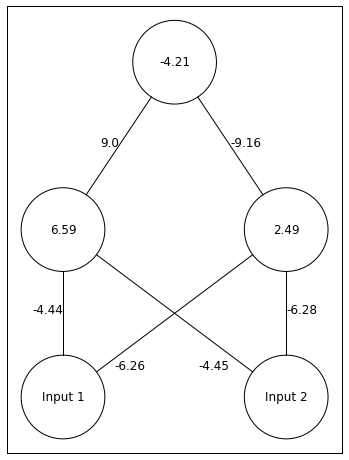 This is all well and good, but if you try to train this network with random weights you might find that it produces an incorrect set of weights sometimes. This is because the network runs into a local minima. A local minima is an instance when any change in the weights would increase the error, so the network is left with a sub-optimal set of weights.

Below I hand-pick of set of weights that produce a local optima. 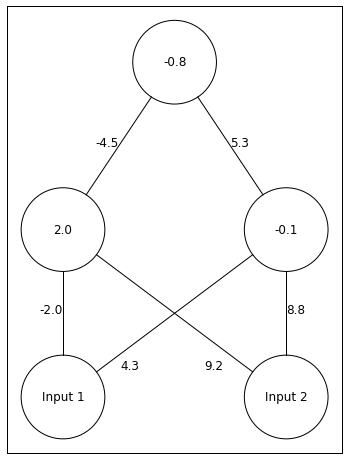 Using these weights as the start of the training set, lets see what the network will do with training. 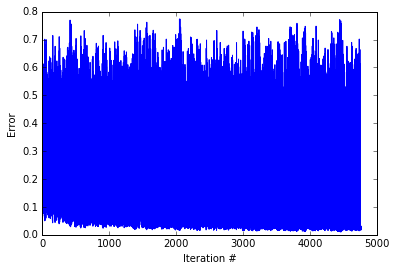 As you can see the network never reduces error. Let’s see how the network answers to the different input patterns. 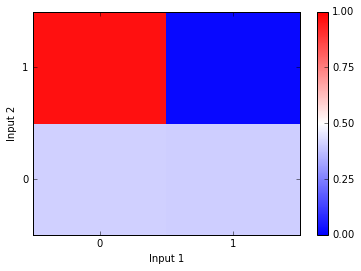 Looks like the network produces the correct answer in some cases but not others. The network is particularly confused when Inputs 2 is 0. Below I depict the weights after “training.” As you can see, they have not changed too much from where the weights started before training. 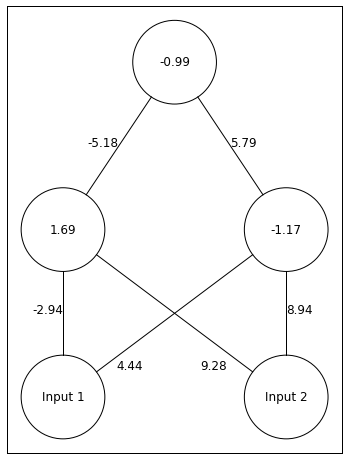 Alright, that’s it. Obviously the neural network behind alpha go is much more complex than this one, but I would guess that while alpha go is much larger the basic computations underlying it are similar.

Hopefully these posts have given you an idea for how neural networks function and why they’re so cool!