Now that the NBA season is done, we have complete data from this year’s NBA rookies. In the past I have tried to predict NBA rookies’ future performance using regression models. In this post I am again trying to predict rookies’ future performance, but now using using a classification approach. When using a classification approach, I predict whether player X will be a “great,” “average,” or “poor” player rather than predicting exactly how productive player X will be.

Much of this post re-uses code from the previous posts, so I skim over some of the repeated code.

As usual, I will post all code as a jupyter notebook on my github.

Load the data. Reminder - this data is available on my github.

Load more data, and normalize the data for the PCA transformation.

In the past I used k-means to group players according to their performance (see my post on grouping players for more info). Here, I use a gaussian mixture model (GMM) to group the players. I use the GMM model because it assigns each player a “soft” label rather than a “hard” label. By soft label I mean that a player simultaneously belongs to several groups. For instance, Russell Westbrook belongs to both my “point guard” group and my “scorers” group. K-means uses hard labels where each player can only belong to one group. I think the GMM model provides a more accurate representation of players, so I’ve decided to use it in this post. Maybe in a future post I will spend more time describing it.

For anyone wondering, the GMM groupings looked pretty similar to the k-means groupings.

In this past I have attempted to predict win shares per 48 minutes. I am using win shares as a dependent variable again, but I want to categorize players.

Below I create a histogram of players’ win shares per 48.

I split players into 4 groups which I will refer to as “bad,” “below average,” “above average,” and “great”: Poor players are the bottom 10% in win shares per 48, Below average are the 10-50th percentiles, Above average and 50-90th percentiles, Great are the top 10%. This assignment scheme is relatively arbitrary; the model performs similarly with different assignment schemes. 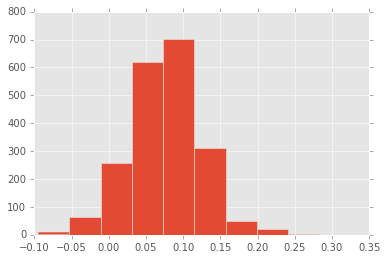 My goal is to use rookie year performance to classify players into these 4 categories. I have a big matrix with lots of data about rookie year performance, but the reason that I grouped player using the GMM is because I suspect that players in the different groups have different “paths” to success. I am including the groupings in my classification model and computing interaction terms. The interaction terms will allow rookie performance to produce different predictions for the different groups.

Now that I have all the features, it’s time to try and predict which players will be poor, below average, above average, and great. To create these predictions, I will use a logistic regression model.

Because I have so many predictors, correlation between predicting features and over-fitting the data are major concerns. I use regularization and cross-validation to combat these issues.

Some important notes - I am using “balanced” weights which tells the model that worse to incorrectly predict the poor and great players than the below average and above average players. I do this because I don’t want the model to completely ignore the less frequent classifications. Second, I use the multi_class multinomial because it limits the number of models I have to fit.

Okay, the model did pretty well, but lets look at where the errors are coming from. To visualize the models accuracy, I am using a confusion matrix. In a confusion matrix, every item on the diagnonal is a correctly classified item. Every item off the diagonal is incorrectly classified. The color bar’s axis is the percent correct. So the dark blue squares represent cells with more items.

It seems the model is best at predicting poor players and great players. It makes more errors when trying to predict the more average players. 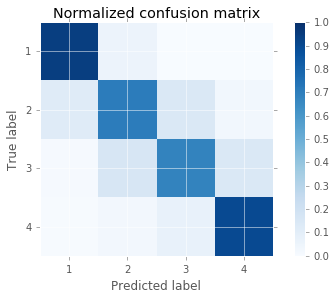 Lets look at what the model predicts for this year’s rookies. Below I modified two functions that I wrote for a previous post. The first function finds a particular year’s draft picks. The second function produces predictions for each draft pick.